Why these chains are expanding and what to expect. 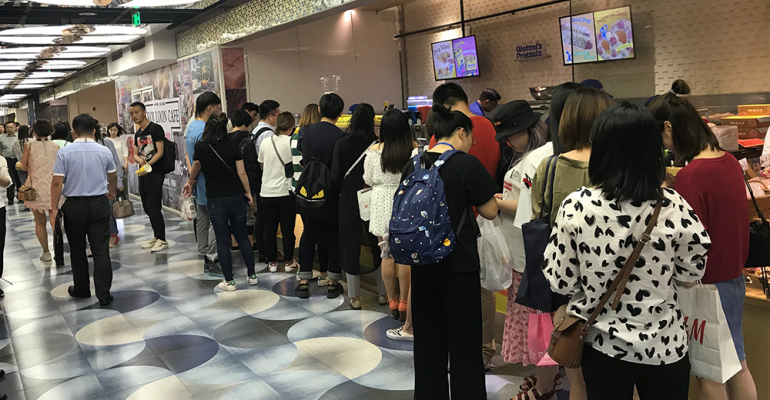 What does a pretzel brand do in a country where there’s no word for pretzel?

In Chinese languages there is no character that specifically translates to “pretzel,” so when Wetzel’s Pretzels entered the market this summer, they had to get creative.

Wetzel’s decided to pair the company logo along with characters for “fresh baked.” The company’s first location in China opened in the popular Reel Mall in Shanghai in June and another has since opened.

Through the company’s research, Doug Flaig, Wetzel’s vice president of franchising, found that consumers gravitate toward products made with limited ingredients, freshly prepared in front of them. 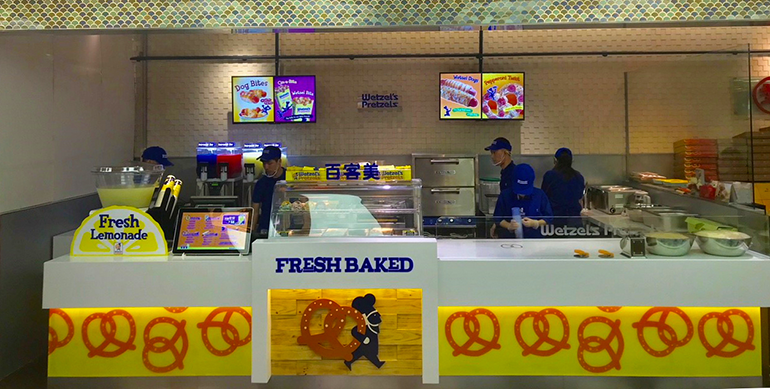 Wetzel’s was able to bring over the essentials of their brand — the simple menu of pretzels hand-rolled onsite, along with bakery smells and bright yellow and blue branding.

Now how to define a pretzel for a new market?

“We went and toured a lot of mall properties and met with landlords and we really had to explain what the product was, so I brought with me videos of us preparing it,” Flaig said. 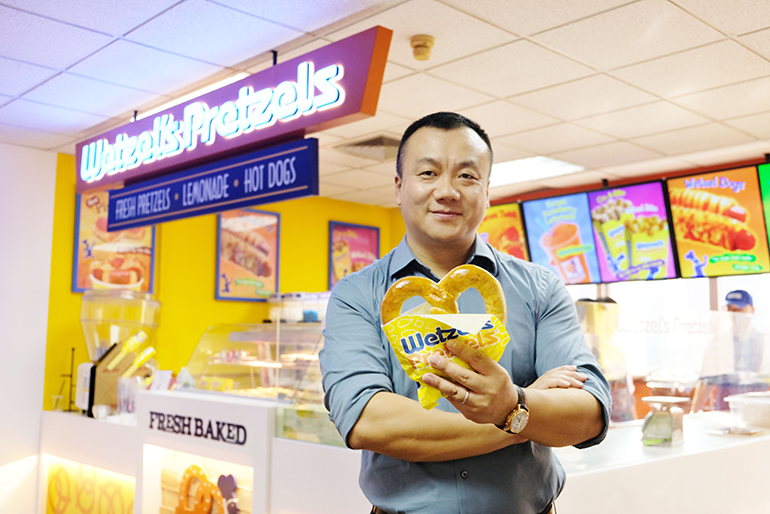 “But when they saw how it was made and they saw how the products resonated with the consumers, they were really pleased with and they felt like it was something different and unique that they hadn't seen before in that city or in that market.”

To help bring the brand to China, the Pasadena, Calif-based quick-service company relied on Will Zhu (above), a Chinese national who became the company’s master franchisee. Zhu approached the company after having tried Wetzel’s while traveling in California.

So far, “consumer reaction has been really positive,” Flaig said.

A few months later, Wetzel’s Pretzels has two mall-based locations open in China, two more in the works and ultimately plans to open 50 location in the next 10 years. The company is part of a new wave of brands looking to expand their reach in the most populous country. Brands like McDonald’s, KFC, and Pizza Hut have paved the way, with varied levels of success, but the newer brands entering the market are finding competition from homegrown sources and discovering new demands and desires from Chinese consumers.

“In general, there's just a sense that there's a great deal of potential in China,” said Michael Schaefer, global food and beverage analyst for Euromonitor, a market research provider.

“It's almost like we're getting a second wave of some international chains, especially coffee chains looking to set up shop there.” Chinese consumers are excited about specialty coffee.

Starbucks Coffee Co. has been in the region for nearly two decades, but in the past few years has seen impressive growth. In fact, the company recently announced it is opening a cafe every 15 hours in China.

Although the Starbucks had a disappointing Q3 in China, the company attributed this to a rapid opening of new locations that partly cannibalized sales from existing sites. The company currently has approximately 3,400 stores in China.

“Having been in China since 1999, the strength of our brand, the trust we have built with our customers and partners, and our working knowledge of the many nuances of the China market uniquely positions us for continued long-term success,” CEO Kevin Johnson said during the third-quarter earnings call.

Starbucks is planning to introduce delivery in the large markets of Beijing and Shanghai this fall and revealed a deeper partnership, including on-demand ordering, with Alibaba, sometimes referred to as the Amazon of China.

It seems Restaurant Brands International Inc.-owned Tim Hortons is ready to follow in Starbucks’ footsteps. In July the coffee brand announced an exclusive master franchise joint venture agreement to open more than 1,5000 Tim Hortons restaurants throughout China in the next ten years.

“We’ve been flat in sales over the last few quarters in the U.S. and Canada,” Alex Macedo, the president of Tim Hortons, told The Wall Street Journal in July. “We feel really good about the China opportunity right now.”

In the coffee space, for example, Beijing-based Luckin Coffee has opened over 500 outlets in Chinese cities less than a year after launching, according to the business news site Quartz.

Another concern for foreign brands is the perception of being unhealthy and lacking transparency, said Schaefer.

“I think a lot of the big brands the biggest American brands like McDonald's and KFC and so on, have spent the last couple of years in a kind of transition period,” said Schaefer.

“We saw Yum! Brands spin off its China operations, they're franchised now, and that was a big deal. And both McDonald's and Yum brands and many other brands have had a number of food safety scandals in the 10 years that they've been involved with. I think there's been a reordering of demand of the supply chain of what consumers are looking for.”

Yum! Brands, Inc. spun off its China operations in 2016 after economic and food safety concerns. But Yum, which owns KFC, Pizza Hut and Taco Bell, has recently begun growing the later brand in China.

“We see Yum Brands doing more and more with Taco Bell as kind of its international American brand,” said Schaefer. “Taco Bell kind of represents a next step in the kind of American experience that is being sold through a chain restaurant.”

Taco Bell currently has three restaurants in China and while the core of the brand is consistent, said Lawrence Kim Taco Bell’s VP of growth, the company creates menu items specifically for the Chinese consumers’ taste such as a shrimp and avocado burrito, a crunchy crayfish taco and oolong milk tea.

Quick-service brands the Taco Bell face increasing competition in the U.S., so while growth in China might be tricky it’s hard to pass up. 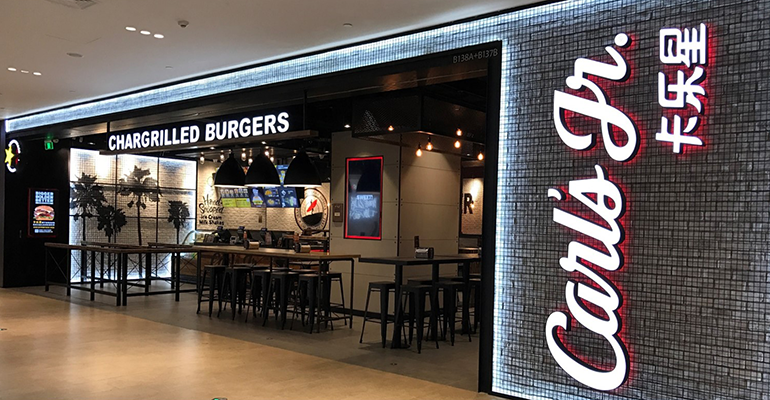 “The size of the prize is so worth it that you go through the growing pains, versus a very small market,” said Charles Jemley, the new CFO of CKE Restaurants Holdings, Inc

CKE the parent company of Carl’s Jr. and Hardee’s, has fewer than 20 locations in China right now but has ambitious plans for growth. Jemley, who worked on international growth for Yum and Starbucks, has found challenges with real estate and labor in the country, but said, “you cannot be a global brand and not be China. You just can't do that. It's too big a market.”

And international growth has its fair share of softer benefits, too.

“What I really like about internationally, honestly, is it's also a clean sheet of paper, oftentimes for the brands that have the history like our brands do you can test fast and learn fast there,” said Jemley. “A lot of innovation at the brands I've been at previously have come from their overseas operations.”